This was sent by a man in Rhinelander, WisconsinA very eventful day around here... A once-in-many-lifetimes experience! I saw this lil' feller run out in front of a car-- thought it was a lost baby goat. Stopped to get it, and WOW!! A real Albino Whitetail Deer. Just hours old, but doing fine. No Momma deer around. Another car nearly hit it in front of me ... 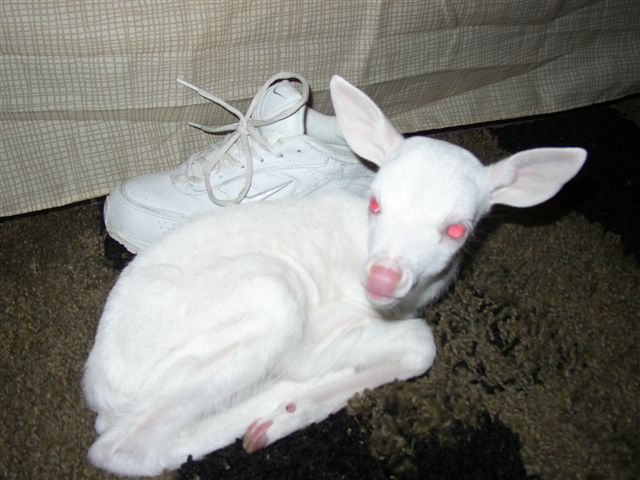 Well, he is THE neatest thing any of us ever saw. And such a 'freak of nature'; only
one in more than a million are ever born. He took his bottle of food, followed us
around the house, and is doing great. So, we called the Zoo & Fossil Rim, who were
both interested, but we're going to send him to a rehab farm. Maybe he will make it
in captivity somewhere and be appreciated. So rare... Sure wanted to keep him
though but it's not the thing to do.... not LEGAL either. Here are a couple of pictures
to show you. He was snow white, pink eyes, ears, nose and hooves. Kids called him
POWDER. He was SO small. That is my shoe lying beside him. WOW! How cool is
that??